Boys Can Be Mean! 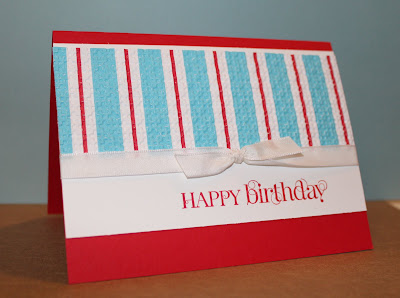 So yesterday my son tells me it was his friend's birthday, and he wants to give him some money. So I told him ok, and I'll make a card. And he says he doesn't really need a card. Then I told him that's a little weird to just hand your friend some money (but, yeah, maybe 16 year old boys are a little weird anyway, huh?). So, conversation ended, and today I made this card. When I handed it to him, he said he wasn't giving that 'dumb card' to his friend. - What a poop he is!! So I told him then maybe I won't be giving you the money you wanted to give him!

And it gets better... my husband comes in and I tell him that Alex is mean. Blah, blah... birthday... I made this card... So he asks if it's for a boy or a girl. We tell him it's a boy. He says 'no card, just shake his hand and tell him happy birthday.'

So who's out of touch most - me? my husband? Maybe both!! 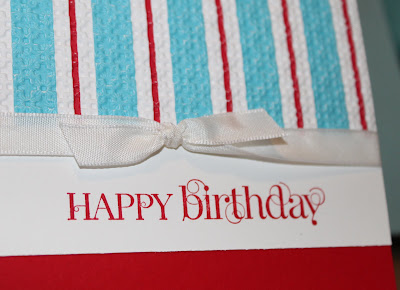 So whatever! I guess the card will go into my card stash ready to give someone else. Glad it was simple to make and I didn't spend all day on it!

Hope you had a great Sunday!

I'm with Andrea. As the mom of 2 teenage boys (yes, I color my hair), boys are just weird.

Personally I love the card.

Maybe it would have worked without the ribbon!

Yes, just shake hands and tell him Happy Birthday. Which means "no money". They aren't six anymore and going to a birthday party.

Great card Julie! I think it's a guy thing they think it's no cool to give cards (Weird) Oh well, at least you have a card done for another time.

I'm laughing as I'm agreeing with everyone...what pooperheads. And you were SO NICE to make a card (really!) and it is SUCH A LOVELY, crisp card.

That was so not nice- great card! I'm going to case it!
Mary Calderwood

I think it's a boy thing! My husband is the same way!
Loe the card though!