A Sneak Peek and a Birthday Gift!! 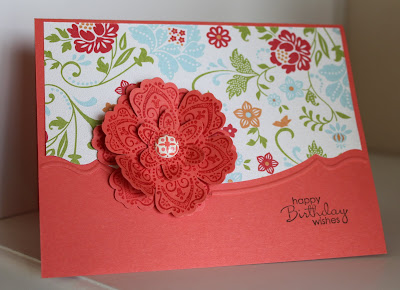 I just finished and mailed out some swap cards today! This card was inspired by a card I saw by Mercedes Weber. I was supposed to used the Mixed Bunch set, but I also wanted to use some of the fun new accessories that are going to be in our upcoming Occasions Mini Catalog! 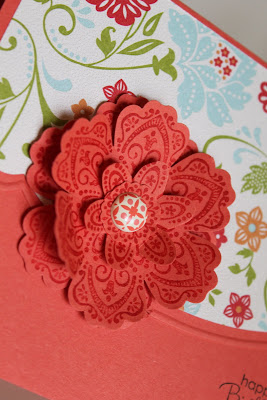 Here's a close-up of the flower that is punched on the two outside layers (with the new Blossom Punch), and then hand-cut on the two inner layers. I used Poppy Parade ink on Calypso Coral card stock to make it pop a little (more than Calypso ink on Calypso card stock). - And the super cool brad in the center is a Sneak Peek from the Sale-A-Bration goods that will be available in late January! 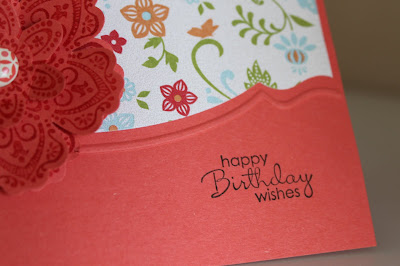 
And here's a special gift I got a couple weeks ago... 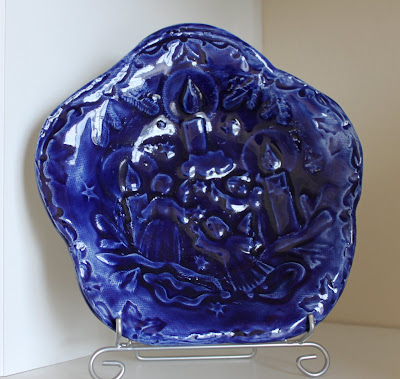 A couple weeks ago it was my birthday - and this was a gift from my son! He's taking Ceramics in high school this year. He's brought home a few projects he's made - a pinch pot and a soap dish, a square lidded container. All really nice projects for a guy that I don't consider that artsy!! But then he brought home this plate for me - and I was a little blown away! The detail... the paint color is awesome... It looks like a whole different level of Ceramics from him! 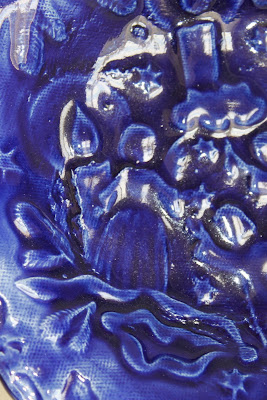 Here's a closer look at the detail of one of the angels, and the details around it. Pretty cool, huh? So when I asked him how he did it - he said that he sort of stamped it! :) He laid it over a plate that had that impression on it and pressed it down to pick up the image - trimmed the edges and pulled it off. Then it was heated (however they do in Ceramics - I never have done it!), and he painted it. I Love it - and an artist in the making! :)

LOVE what you've done with your new goodies! Don't have the new punch & stamp set yet but can't wait to get it.

Can't wait for class :) Love the colors and all the new goodies we will be playing with. OMG your birthday present is awesome, way to go Alex!! Beautiful plate and I love the color!

Love, love, love this card and I can't wait to make it.
Tell Alex, A+!
Happy belated birthday.

Awesome Julie. Great job from you son too.