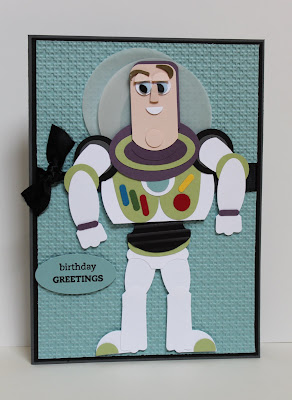 This card is for my nephew, who is turning 4 this weekend. He's having a Toy Story themed birthday! So I found this AMAZING punched art work by Ellen Kemper on Stampin Connection. She has an awesome tutorial on her blog here for making Buzz out of punches! It's definitely not the quickest card I've ever made, but it's maybe one of the coolest! - Or at least I hope my nephew thinks so!

Not much stamping, but I added the birthday saying from the On Your Birthday set, and gave it a Square Lattice texture for the background. And yes, there was a little trickiness to the embossed background too - It's too big to fit in the folder. So I did it in two parts. But then there was a yucky seam in the middle (as much as I did try to line it up!). So that's why I added the black ribbon, to hide the seam it made! 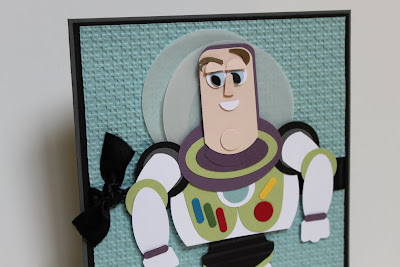 Here's a little bit of a closer-up of Buzz! And guess what, with almost ALL of the punches in the Stampin' Up! catalog, plus a couple retired ones, you too can have a Buzz Lightyear! - Just kidding! But, Wow! it was actually cool to have all the punches to be able to make this!!

Oh wow!!!!!! This is so stinkin' cute and creative! My sons would just love this! Thanks for sharing it. :)

How cute is this? I hope I can find someone to make this for!

This is an AWESOME card!!!!! I love it! I hope you don't mind but I think I am going to have to case this!!! Thank you so much for sharing!

You did me proud! Most of the cards made with Buzz have stopped at his knees.

Great job with the old buzz-aroo

OH man this one looks scary to make!!!! But it looks soooo cool! You did a wonderful Job on Buzz!

So clever, so fiddly, how did have have the patience?

Wow...this is so cute, and awesome!! boys will love this!!
TFS 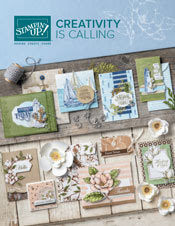