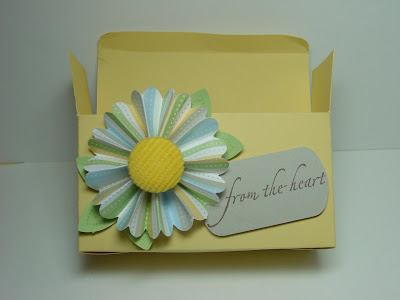 Last night was the First Friday Technique class for February, and we made this box with the Big Shot! The die we used was the Box #2, a new one offered in the New Spring/Summer Idea Book and Catalog. I like it A LOT! It's so cool to just run the cardstock through the Big Shot, and wahlah - a box cut and scored!! So, then for the real technique - we made the Accordian Flower. It is pictured in the new Sale-A-Bration mini catalog in a little simpler form. We added scallops to the edge with the Scallop Edge Punch, which also made it super easy to score (Thanks to a hint from one-awesome stamper, Johni, who said maybe you don't need to score - and was right!! We just folded back and forth).
Some ginormous Glue Dots hold the Accordian Flower on the box - and the super cool Corduroy Buttons finish the front and center of the "flower!" 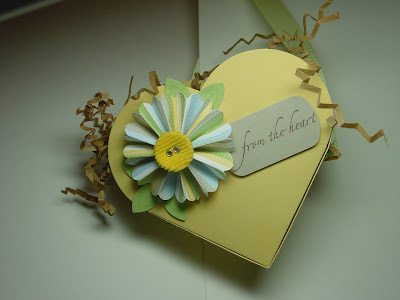 This was another version of the same project, using two of the Petal Card die cuts, also from the Big Shot. It normally has four rounded edges that all fold up into the center, making a cute little treat holder. But I just folded up two of the edges on two Petal Cards and adhered them to a 2" by 5 1/2" piece to create the "bottom." Then I added a ribbon for the handle - and it made a cute heart-shaped box. ~ Just in time for Valentine's Day!

Hope you're having a great weekend!