End of the Year Celebrations! 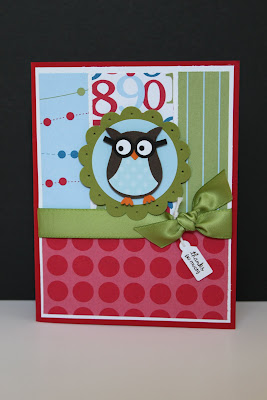 This is yet another End-of-the-school-year card I made! I guess it could be considered an end-of-the-Stampin' Up!-catalog-year too though! The Celebrations Designer Papers are on the Retiring Accessories list, so it's the end for them as well!! 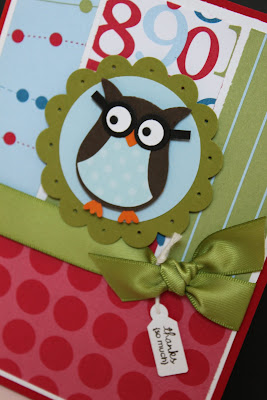 And here's a close-up of the 'teacher' owl! I just added some little slivers of black cardstock for the arms of his glasses! And really the punch has all the parts to make the eyes look like glasses - just use black for the largest part of the eyes and white for the second largest (instead of doing the opposite for regular eyes!).

I added a little jewelry tag punch with a Tiny Tags saying for the 'thanks {so much},' and some of our "much needed" White Bakers Twine!