Loads of Love for Alex! 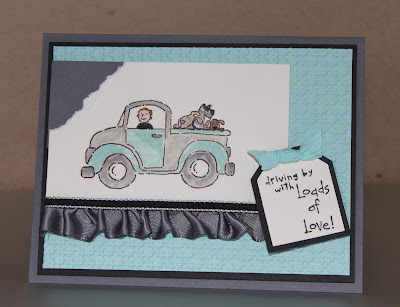 I made this card today for my son. He's taking the test for his driving permit, and it's not the first time... So, I hope this time is the charm! He was being kind of lazy in studying for it when he took it before. I think he thought it wouldn't be that hard. Anyway, he has been studying and took a couple practice tests over the weekend. I know he's worried about it, so I decided to make him a card. I know he doesn't always seem to appreciate the cards I make, but I still wanted to show him that I care. 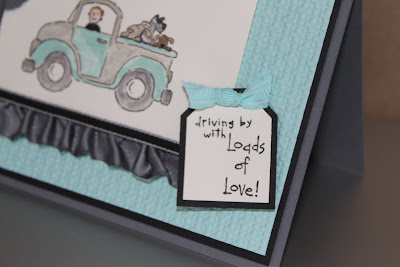 And I wasn't sure about what saying to use so I combined some parts from both of the Loads of Love sets. I kind of like how it came out. I masked the 'driving by with' and added the 'Loads of Love' to it. And I like how the 1/8" black taffeta draws your eye across to the tag. I guess the gray ribbon frosting is maybe a little feminine, but I just had to do it. I love my ribbon frosting!

Even if he doesn't appreciate the card, I just hope he does well on his test.

It took my son 2 tries. He studied and took 7 practice tests passing them all. He said on the actual test, there were tons of questions about statistics and after failing, he went back to the manual and found that the stats were imbedded throughout the text. Second try, passed with flying colors! Good luck to your son - I'm sure he'll do great!!